Who will fill the apparent vacuum? May 23, 24, 25, 2017: I have lived three days of both gestation and rebirth at the Fondazione Mudima in Milan. I wanted to meet the eye of the audience, recognize the “faceless man” represented by Alessandro Verdi and seize all fragments of Essence.

“Tempo zero” was my baptism in the Real, my first public performance conceived, curated and realized entirely by me. After the gestation, after the birth, came the baptism.

These are a few words of end with which I want to emphasize the fact that nothing is over. Time continues to be relative, and although I came out of “zero” and I’m adapting myself to the earth scanning, I confirm that this was just the beginning.

From now on, there will be an intense work of cataloging and synthesis aimed at the realization of a final work that will follow a different process from the speed of the internet. I therefore ask you to be patient.

I thank the photographers and videomakers who have been my trustworthy eyes and my privileged witnesses; I thank those who spoke publicly about my work with dense articles that really moved me; I thank the visitors who just came to see CYAN or who was curious to meet me and my work or who did not expect anything and discovered the wonder of “Navigate the uncertainty” …; I thank who wrote me dedications on paper, poems by email, who followed the six live streaming via social, during which I told fairy tale of the alien that meets the faceless man and in turn he is reached by the Reverie. I thank who shared his/her vision with me through #tempozeroreverie and tempozeroreverie@gmail.com; I thank those who spontaneously hugged me and those who did not fear my sincere look.

I am grateful to the contingency and to the Time that have accompanied me, to the silence used as a precious instrument, to the lilies and roses that lent themselves to this poetic dedication and to the delicate interactions with the visitors … I thank Irene Di Maggio, who has always believed in me; I thank Gino Di Maggio that since long time has allowed me be on first name term with him; I thank Alessandro Verdi for the freedom he gave me and Gianluca Ranzi for trusting in me, I thank Serena for her affectionate support, Carolina for her welcoming help, Luca and Fabio for having tolerated my daily presence and finally I thank Agnese and Alessandro that this time did not lose my “first steps” in the world.

I tell you a secret: today Reverie was born, today is my baptism. 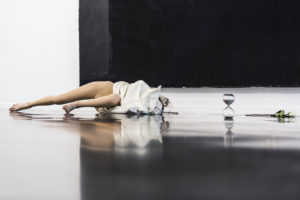