A fluid dedication to Bill Viola’s work As part of the Bill Viola exhibition, the “Electronic Renaissance”, at Palazzo Strozzi until July 23, 2017, the young artist Reverie will perform a poetic introspection and dedication to the American master, creating a dialogue with her works and the public. The Palazzo Strozzi Foundation, the world-renowned Florentine historical space for research engagement, is home to contemporary art exhibits. It also highlights video and performance art in close connection with the Renaissance period of which the palace was historically constructed, making it the ideal dimension for an experimental interaction between the young artist and Bill Viola’s art.
On 20 July 2017 from 18:30 to 21:30 Palazzo Strozzi will become Reverie’s “room”. Curated by Valentina Guidi Ottobri, “Hypersensitive Renaissance”, does not add any invasive elements but Reverie will deliver an artistic work by adding new gestures, evocations and emotions that will filter the video through her body and “touch” the audience. The result will be subjective and different for those who will be part of it. At the entrance, visitors will be given a text that explains the art of the young performer and contains her dedication: an invitation to share individual reactions. The final result: an encompassing artwork that reflects the pre, present and post -performance. The key to reading this pictorial aesthetic that connotes Viola’s works is ethics. Reverie says “I have tried to work on the senses, both individual and collective to go beyond the surface of things and to go straight to (as Bill Viola teaches) the soul. What triggers the gesture of the encounter in “The Visitation”? What happened to the heart of the Martyr? And did you see Eternity pass by chance? “ Reverie profoundly investigates the foundations of gesture and movement by living it and asking others to join in a shared fruition. The goal is “maieutic, to have both the audience and myself leave changed and disturbed, surpassing the unbroken essence of video reflections to bring questions and universal messages into our minds. The cues represented in the bodies of Bill Viola will be sparks of life and will generate an endless continuity: an uninterrupted cycle that will produce a hypersensitive flux.” “At six,” said Bill Viola, “I was drowning in a lake, I was not afraid, I saw the fish and the reflections of light. I was happy. I thought I would go to another place, which I did not mind. Then my uncle took me out. That was the beginning of my reflections on the water. Many works are based on that moment. “ The death, birth and strength of the elements: Reverie will start from the foundation of the art of Bill Viola, or from Strozzina, and later face dialogically the other works exhibited on the noble floor of the Palace. It will overcome “The Crossing” to undress before the founding fathers of our believing, atheist, philosophical and sensitive existence. “We have lost the center of our emotions, says Bill Viola; we have to bring together our heads and hearts. For too long they have been far away. We must go back and bring them together.”

“Hypersensitive Renaissance” is about the recovery of the physicality of time. It is a journey from birth into the search of eternity. The work is a dedication to the Bill Viola exhibition that discusses the “Timeless Renaissance” and turns the historical Palazzo Strozzi “Electronic”. It commemorates “The Visitation” of Pontormo through the forgotten work of Burden “The Visitation” from the 1970s. Reverie says she wants “to involve the public to produce a new choral work”, believing that “the life of performance is in th e present” and her “body acts as a vehicle to go beyond the all of the senses.’’ 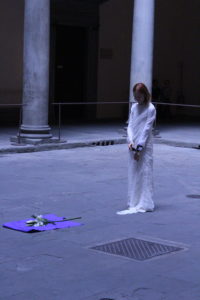